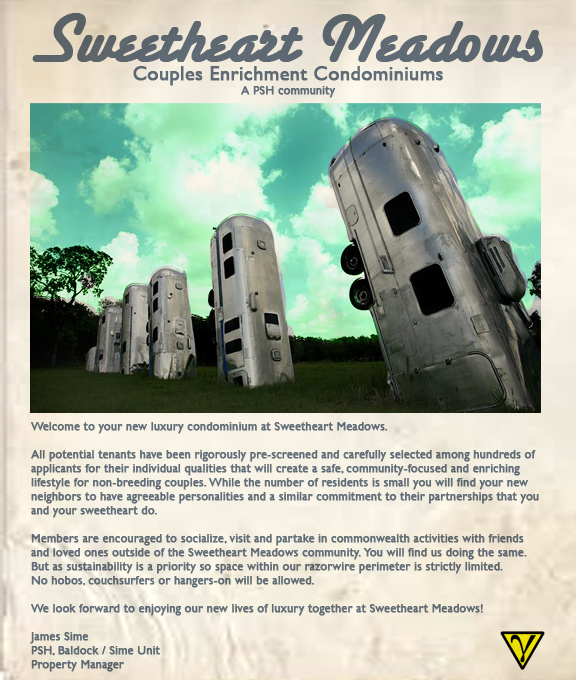 Sweetheart Meadows is a gated luxury flatlander condominium complex at the base of the Oakland Hills in "Oh Town Cafornica" populated by a variety of marginally-affluent post-apocalyptic mutants. When discarded faulty robots start rolling down from the Oakland hills and exploding dangerously close to the razorwire perimeter of Sweetheart Meadows our heroes go to investigate.

Up in the Oakland hills they discover the "Hammertime Mansion" (MC Hammer's former house), a re-activated automated pre-apocalypse war robot factory, which is malfunctioning and spitting out a stream of exploding bots down the hill. A biker gang of Hells Angels obsessed Badders (human-sized mutant badgers) have moved in and accidentally re-activated the ancient war robot factory. When the Sweetheart Meadows residents attack the Badders they are caught by surprise by when a number of wedge-top fade wearing Badders attacking from above, floating down with guns a-blazing, parachuting into battle in gigantic genie pants.

This adventure was based on a loosely-interpreted and heavily re-flavored version of the famously unpopular "Steading of the Iron King" sample intro adventure from the 2010 Gamma World 7th edition box set (aka "D&D Gamma World").

As a 21 year long resident of Oakland, CA's Ghost Town neighborhood (and a total O-Town flatlander) I set this game right in my back yard (where all great post-apocalyptic GAMMA WORLD games take place!) and used this adventure as not-so-subtle personal commentary on the gentrification of Oakland. It might just be a dumb RPG game but a little social critique is essential for all great science fiction works. Aside from Kirsten, the only other Oakland resident in the group, I don't think the players really picked up on much of the Oakland / Mistah F.A.B. / hyphy / ghost riding the whip references, or the many over the top MC Hammer shout outs, or much of any of those gentrification commentaries... but I can sure tell you that they all had a lot of fun playing those characters and fighting those exploding robots and mutant badgers!

Hope to return to Sweetheart Meadows some day!