WUVABLE OAF is the coolest comic I've read in years.

So it was an true honor to be asked by series creator Ed Luce to write a strip (to be drawn by Ed himself!) for the first OAF ANTHOLOGY in 2014. Kirsten and I filled this comic with as many references that we knew would make Ed laugh as humanly possible. He added in even more (including the Meat Grinder) and totally cracked us up! Ed's fusing of his usual style and Frazetta-inspired artwork on this is fantastic. Hope you like it! 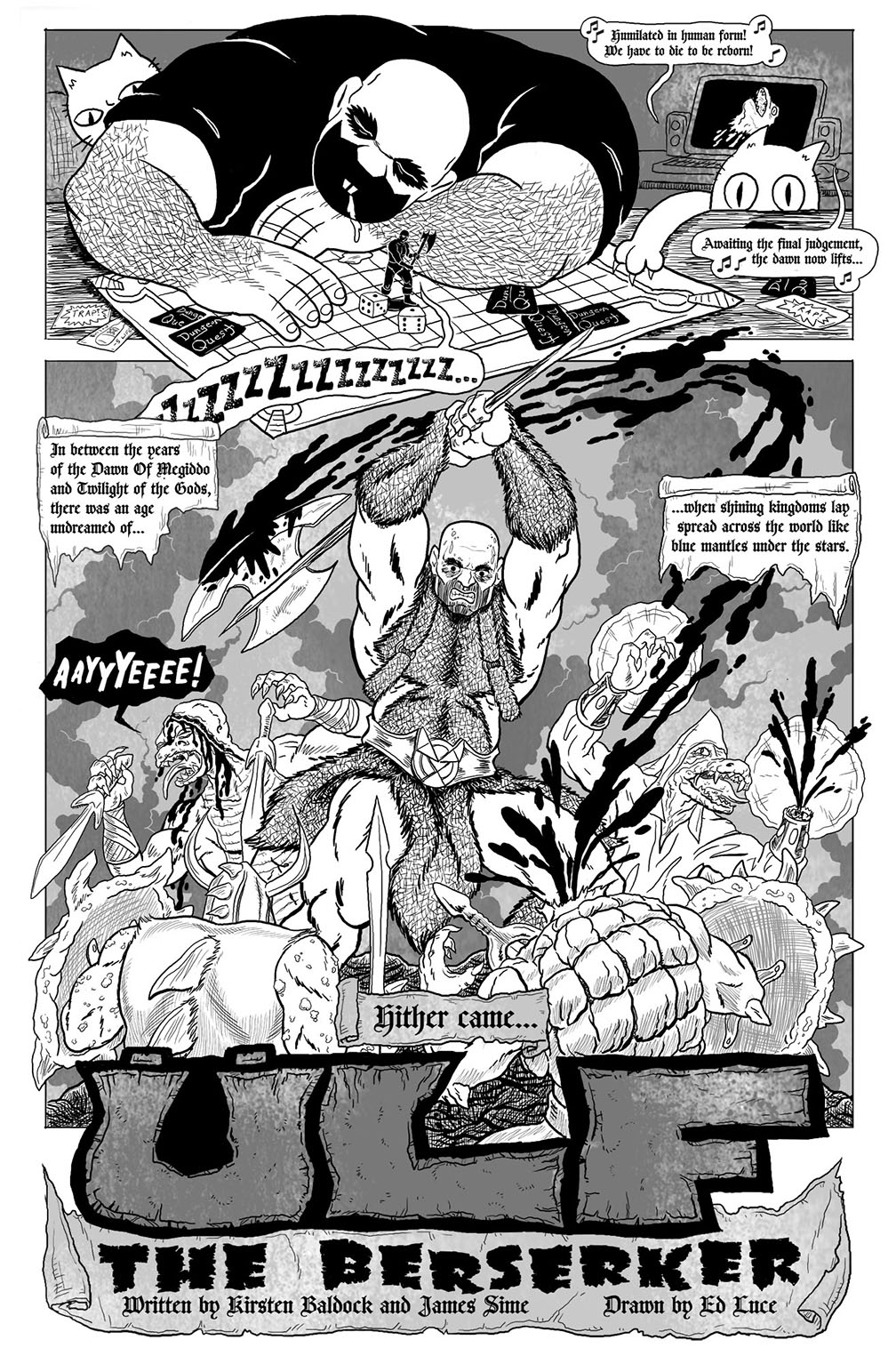 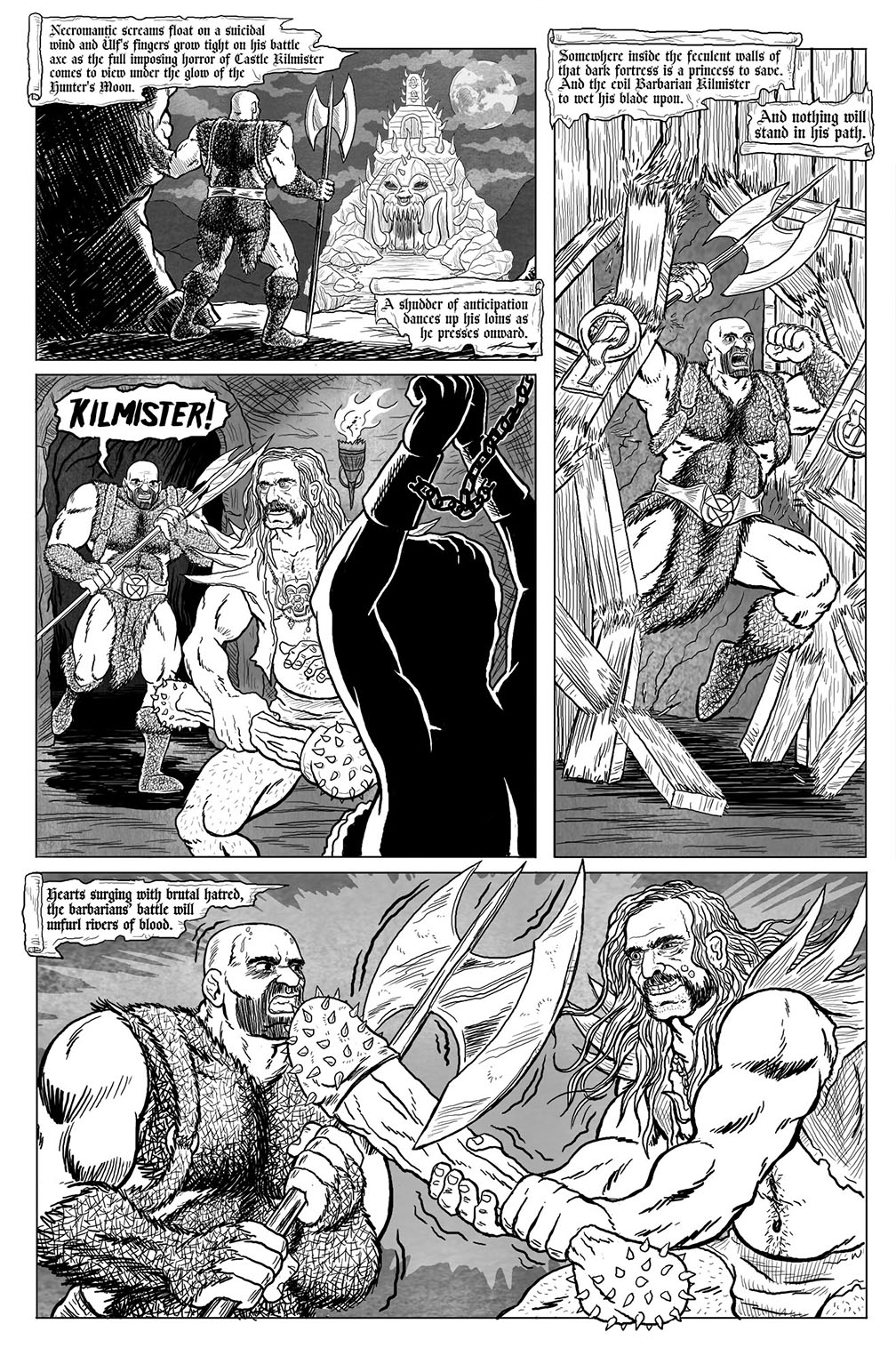 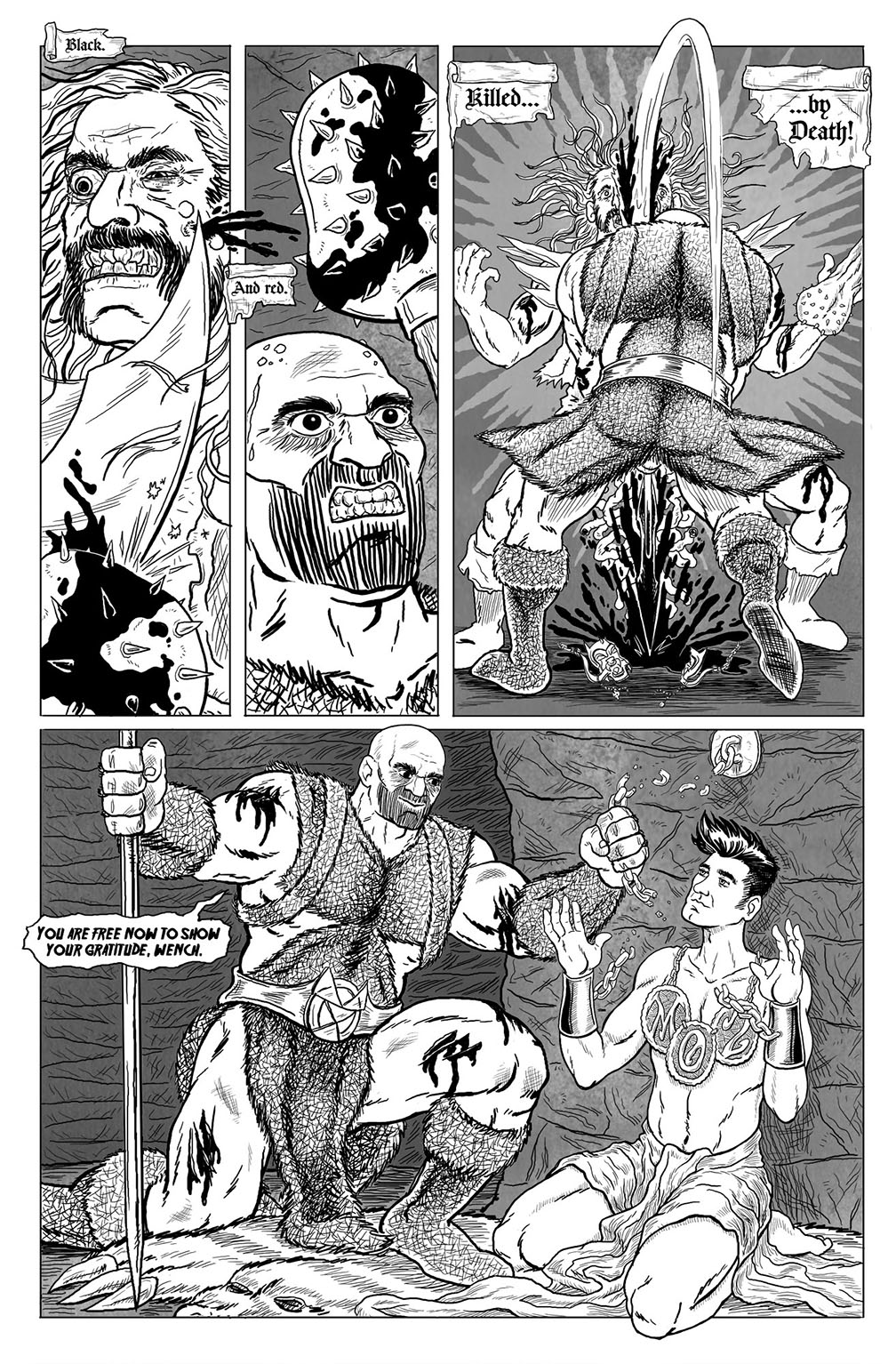 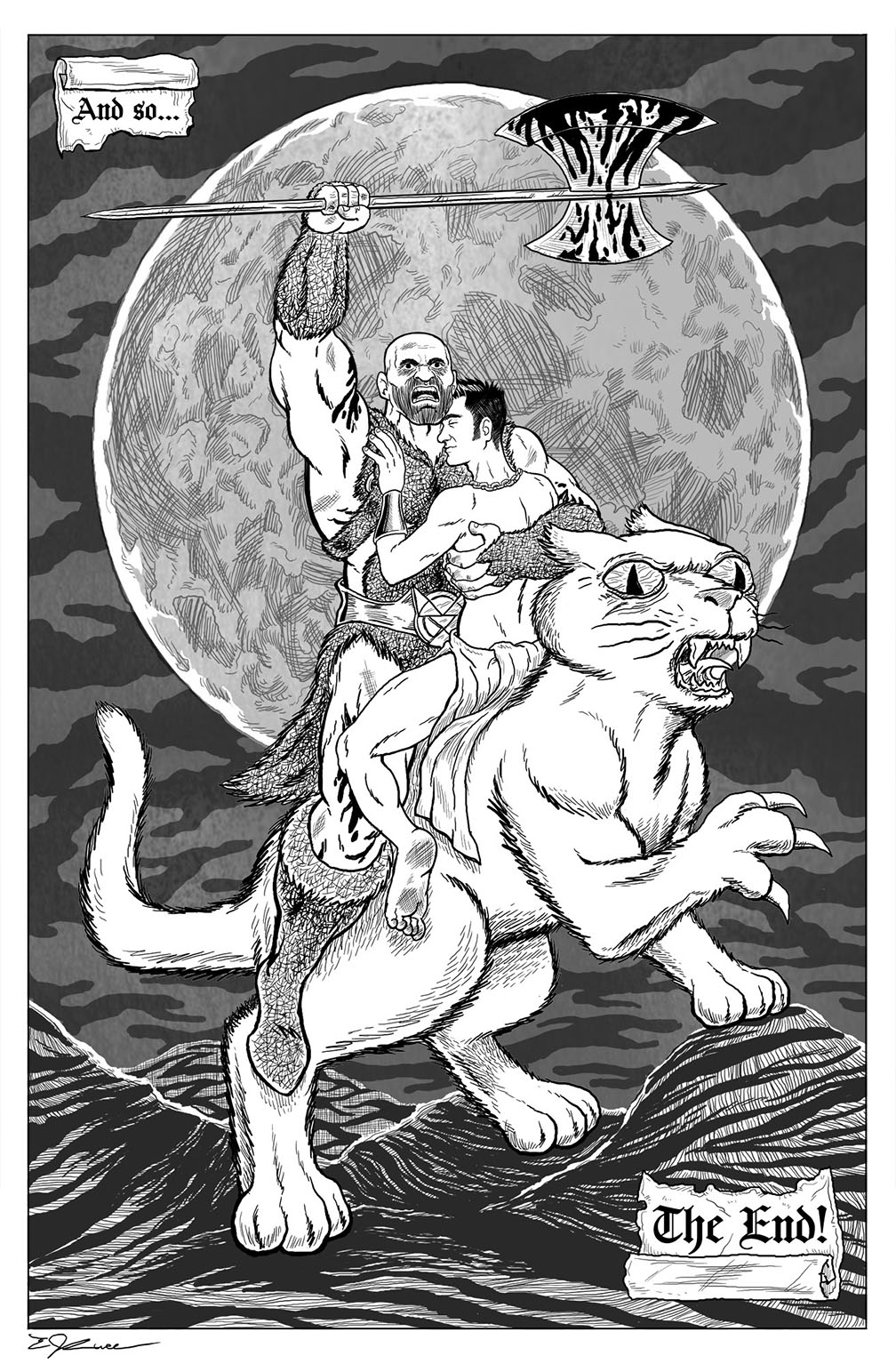 Wuvable Oaf has fallen asleep while playing Fantasy HeroClix and listening to metal albums. He dreams himself as a savage, and heavily ripped barbarian named Ülf. In order to save a captive princess he must enter the spooky Castle Kilmister and do battle with an evil barbarian who lives there... Lemmy in a loincloth! Ülf slays the evil Kilmister and saves the princess... who happens to be the beautiful Morrissey in a chainmail bikini.

This page has one wide-screen panel across the entire top of the page, though it might be best if it weren’t a tall panel to leave room for height in the action panel below. The top panel has small snoring Zs that swirl down the left side of the page leading the eye into the dream action.

The captions should be on a piece of parchment or something similar, in Ye Olde English-y script. The text is ripped straight from the opening of CONAN: THE BARBARIAN (1982), with a small re-write and some adaptions to reference some albums he's listening to. The first caption can come between the two panels. The second caption is the title of the story, it should be at the bottom of the page and it should be a big thick fantasy logo type thing, made from rocks or iron or meat. Perhaps Will Eisner it up and have gore from the battle dripping or splashing or tumbling onto it.

Panel One
We find our most wuvable Oaf fast asleep amid a pile of Fantasy HeroClix and Metal Albums (including Motorhead, Celtic Frost, Slayer, Bathory, Manowar, these will be influencing Oaf's dream). ZZZZZ snores appear above his head in small letters, each one growing larger and swirling across the left side of the page, which create the fragmented corner of the next panel as we, the readers, are carried through his snoring rumbles into his dream world with him.

Panel Two
Oaf, his beard shaggier than it usually is and his muscles extra ripped, wearing nothing but a loincloth, fur boots and carrying a great battleaxe wages a war against hordes of monsters, slaying them with ferocity. Since we have entered into Oaf's dream fantasy world we're going to pepper it with imagery that he loves, found amongst the covers of his favorite fantasy books, metal albums and 80s Sword & Sorcery movies. This panel is a Frazetta reference, inspired by one of these two famous paintings.

CAPTION:
In between the years of the Dawn Of Megiddo and Twilight of the Gods, there was an age undreamed of, when shining kingdoms lay spread across the world like blue mantles under the stars. Hither came...

("Dawn of Megiddo" is a Celtic Frost song and "Twilight of the Gods" is a Bathory album.)

Panel One
Widescreen panel. Ülf stands in the foreground looking at a grand castle on a hill. This is Castle Kilmister where our antagonist lives, an evil barbarian who looks remarkably like Lemmy Kilmister from Motorhead. His castle is as black metal as it gets, all ancient and foreboding.

If we want to throw a reference in here, Venger's castle from the classic D&D cartoon could be cool (http://www.dungeonsdragonscartoon.com/2010/05/vengers-castle-2.html) or if it is possible to make Castle Kilmister look like the Motorhead logo adapted (like they did on the cover of Orgasmatron: http://www.discogs.com/viewimages?release=2189550) without it looking *too* much like Castle Greyskull, that could be a homerun too. We know you don't get to design too many castles, Ed, so dealer's choice on this one!

CAPTION (upper): Necromantic screams float on a suicidal wind and Ülf's fingers grow tight on his battle axe as the full imposing horror of CASTLE KILMISTER comes to view under the glow of the Hunter's Moon.

CAPTION (lower): A shudder of anticipation dances up his loins as he presses onward. Somewhere inside the feculent walls of that dark fortress is a princess to save. And the evil Barbarian Kilmister to wet his blade upon.

Panel Two
This is a total beefcake shot of our hero tearing open the castle door, his muscles bulging and rippling with the strain. Inspired by this classic scene from the bible:
http://eborg3.com/Bible-Alphabetical/S/600-Samson-Pillars2243.jpg

CAPTION: And nothing will stand in his path.

Panel Three
Widescreen panel. From the perspective of looking from behind a silhouetted “damsel in distress,” whose hands are chained together above her head, we see our antagonist, Lemmy from Motorhead in a loincloth (or really, really tiny furry short shorts. Like this: https://netizen.neocities.org/images/lemmy-shorts.jpg

The damsel in the foreground is in a classic fantasy bondage pose so the reader can get a nice look at her shapely silhouetted form, with hands chained over her head. We're teasing the readers with this feminine form, but it shouldn't be too feminine, as we'll be surprising them with the reveal that the "princess" is actually Morrissey in a Red Sonja style bikini. We don't know about you, but Kirsten and I kind of assume Moz has something of a curvy butt.

The Kilmister is the focus of this panel, with the damsel secondary. If you can fit Ülf into this panel in some capacity that would be cool, otherwise we can have his dialog (in a shouty box?) come from off panel.

Wide screen panel. ACTION! Having rushed toward one another the barbarians clash at the center of the panel, Ulf’s battle axe and Lemmy’s mace crossed between them. Perhaps a shadowy outline of the “feminine” figure in the dark recesses of the castle behind them.

FIGHT! Three tall vertical panels across the top of the page, the first two divided between half a page’s width and the third taking up half the page’s width. Four panel is widescreen across the entire bottom of the page.

The first two narrow panels depict snippets of the battle, quick flashes of action that you can barely comprehend as if there is too much gore, too much speed, and you are entirely too close.

CAPTION (across the top of the first two panels):
Hearts surging with brutal hatred, the barbarians’ battle unfurls rivers of blood.

Panel One
Extreme close-up of Lemmy (and his moles), his head upturned in his classic singing position to drive home the point in case people are too dumb to figure out who our antagonist is. A large gash across his wildly grinning face.

Panel Three
DEATH! View from behind Oaf, his battle axe at the bottom of his swing (bottom right), severing Kilmister’s entire torso along the line of Oaf’s swing, the two halves almost exploding away from each other. Although this scene is pretty brutal, you can draw this as gory or as comical as you want it to be.

SEX! This panel we reveal Kilmister's captive on a bearskin rug (because a bearskin rug is sure to send shudders of anticipation dancing up our readers' loins), still in shackles (again with the dancing and the loins) but with links of broken chains around so you can tell that the ever so manly Ülf has now broken them with his bare hands.

We see our "princess" dressed in a Red Sonja-esque chain mail bikini ... it's Morrissey!

Have fun deciding how much to twink or butch Moz up, but whatever you choose please do draw him as sexy and succulent as possible. Ron will like that.

ÜLF: You are free now to show your gratitude, wench.

Full Page Splash - this is the money shot!

Ülf rides triumphantly upon his mighty steed, a large and ferocious war cat (by which we mean a giant and totally adorable version of one of your big cute kitties!), his battleaxe raised defiantly.

Chain mail bikini-ed Morrissey is draped across the back of the cat in the classic fashion of the just-saved fantasy damsel in time-honored faux-Frazetta style.

We find this quite inspirational:
http://www.notzombies.com/wp-content/uploads/2012/03/frazetta-jc0.jpeg